LONDON.- This morning at Sotheby’s London a rare and magnificent Yuan Dynasty Blue and White ‘Peony’ Jar, Guan sold for the exceptional sum of £2.6 million/$4.1 million, more than six times pre-sale expectations (estimate: £400,000-600,000), in the biannual Fine Chinese Ceramics and Works of Art Sale. The ‘Peony’ Jar, which came to auction from a Private Portuguese Collection, saw competition from four bidders and finally sold to an anonymous buyer on the telephone. 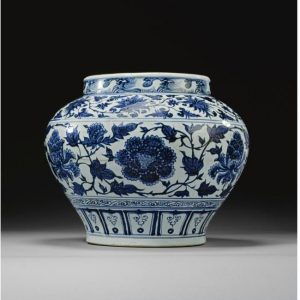 superbly potted, the broad-shouldered tapering body rising from a recessed base to a broad short neck with rolled rim, boldly painted in vivid cobalt-blue tones with a broad band of scrolling peony and lotus, each bloom finely articulated with petals and leaves lightly incised to allow for subtle veining and borne on a continuous undulating leafy stem with attendant offshoot buds, all above narrow classic scroll and lotus-lappet bands, the shoulder encircled by a leafy lotus meander below a vigorously painted band of tumbling waves at the neck, the different registers of the decoration separated by double-line borders, the cobalt-blue of intensely vibrant purple-blue tone with pronounced ‘heaping and piling’ accentuating the painterly brushstrokes against the faintly bluish white glaze, the base left unglazed to reveal the fine porcellanous body with remnant traces of glaze caught against the knife-cut grooves of the foot and the slightly countersunk center; 28cm., 11in. Est. £400,000-600,000. Sold for: £2.6 million/$4.1 million

Property of a private portuguese collection.